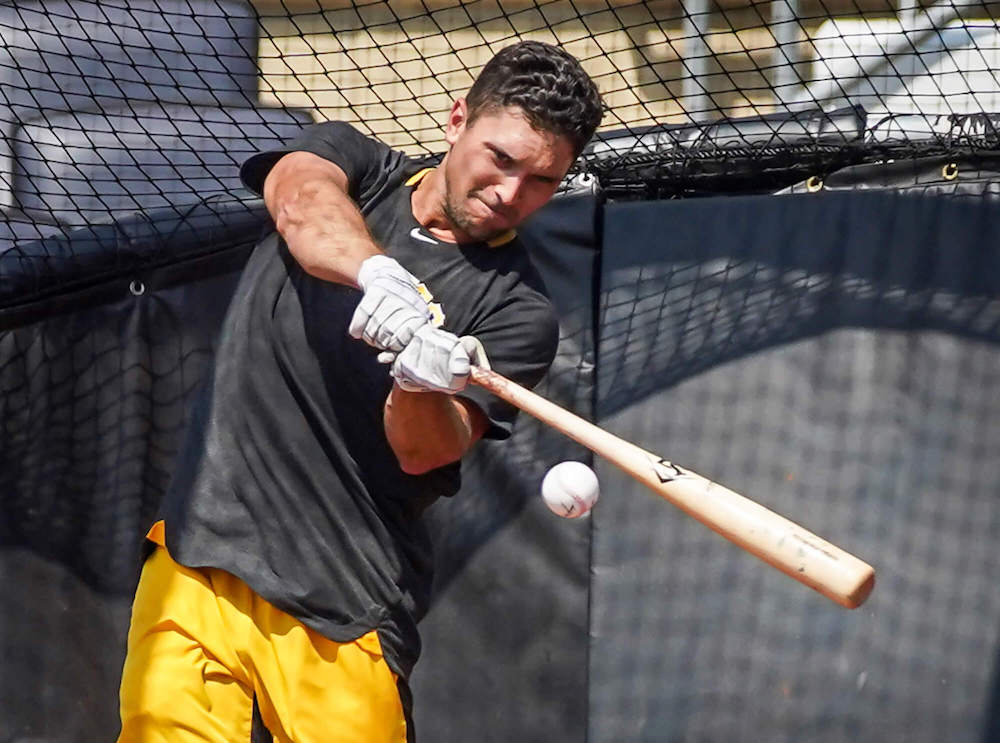 Even before it was official that the National League would use the designated hitter in 2020, Derek Shelton was vocal that he doesn't just want one person to be the DH. Instead, the Pirates will rotate who the hitter is as a way to rest players but keep their bat in the lineup during the compressed season.

While the Pirates' pitching staff is on board to get an extra hitter in the order, especially since it means they just have to focus about getting their arms ready during summer camp, the hitters don't seem as enthused.

Now everyone is willing to do it, especially in a rotating role.

“Nobody dislikes being a DH, I can tell you that," Adam Frazier said this week. "It’s really just a refresher for your legs, that kind of deal. With the 60-game sprint, I’m sure some guys are going to need a day for their legs here and there."

But that doesn't mean a lot of players are necessarily enthusiastic about it. Frazier wasn't exactly excited about the idea, adding that he just wanted to be in the lineup, and "it doesn’t matter if it’s second, left, right, DH. I don’t really care."

So, are there any takers to just hit?

"Me personally, I don’t like DHing," said Gregory Polanco. "But at the same time, you’ve got to be smart. For sure we’re going to take advantage of that, and I’m pretty sure I’m going to be DHing depending on how I feel, and whenever they need me to DH, I’ll be there.”

Polanco has been rehabbing his shoulder for over a year now, going to physical therapy six times a week during the offseason and then working with the same trainer during the shutdown. In summer camp, he started making longer throws to third base and home plate, and while they have not been at full effort yet, the mechanics have looked good and the throws are on target.

He wants to get back out in the field, and even though he knows people will test that arm early in the season, he simply said, "I'm ready for them."

How about Josh Bell? Well, he spent the offseason and the layoff to rework his throwing mechanics, and he isn't exactly eager for their hard work to go to waste by becoming a DH.

"I'm working my tail off every day [to improve my defense]," Bell said. "... As of right now, I view myself as a first baseman every day. I'm going to try and keep it like that."

Ok, does anyone really want to DH?

Well, besides Jose Osuna, who recognizes it's going to lead to more playing time for him, both as the DH and a fielder spelling the regular who is just hitting that day.

"It feels good," Osuna said about how the DH will lead to more playing time for him. "I think that's gonna be one more opportunity to be in the lineup almost every day. There'll be more chances to play. That's good for me, and that's good for my teammates."

But on the whole, it looks like a tough sell.

When asked about why people aren't jumping at the opportunity to DH, Shelton laughed. He saw this coming. That's part of the reason why he wanted to rotate.

"You have to be careful putting someone there and saying 'listen, you should do this,'” Shelton said Friday night. "Because No. 1, National League players are not accustomed to that happening. No. 2, they’re learning how to do it. No. 3, they’d rather be on the field because that’s how it’s gone. And that’s why you see, a lot of guys that are really good at it, they learn how to do it.

"It’s why I feel strongly about not putting one person in that spot. I would rather use it as a rest day or as a 'we’re gonna get a really good matchup' day."