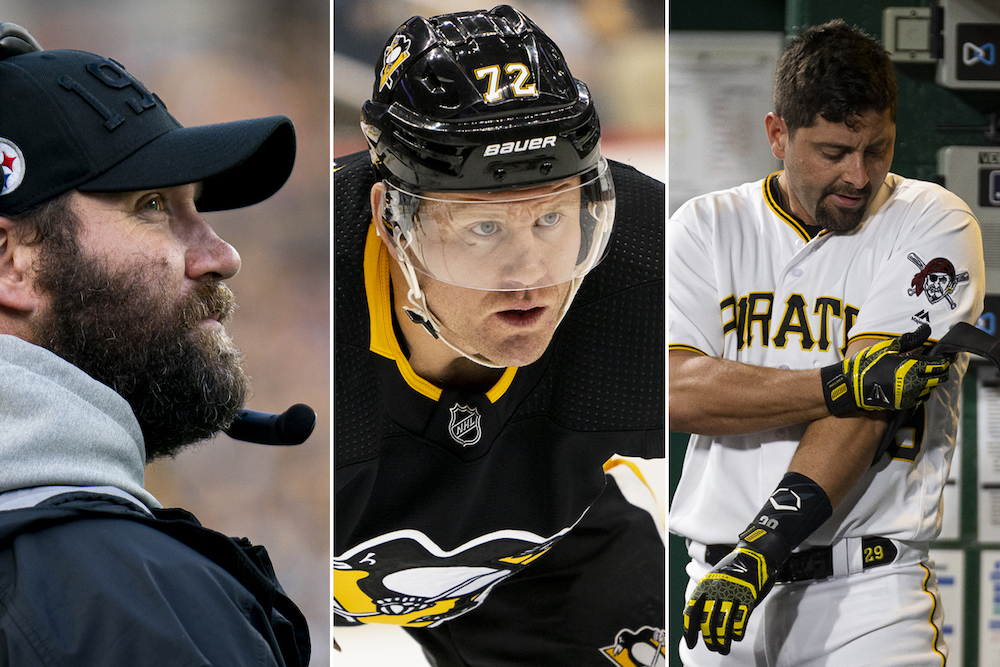 Riddle me this: What do you call it when the same city's franchise quarterback and starting pitching ace both undergo elbow surgery in the same summer?

Answer: Just wait. The hockey team's iconic captain's about to undergo core surgery ... a week before a fellow forward undergoes the same surgery.

No, that's not funny. But then, none of it's been funny. Not for the Steelers, Pirates and now the Penguins, too. Not for the people running those teams. Not for their respective fan bases. Certainly not for Ben Roethlisberger, Jameson Taillon, Sidney Crosby and everybody else who's done the actual suffering through this seemingly endless wave of injuries within city limits.

But allow me, please, to cite a couple blessings to have come from all this.

(I know, I know, easy for me to say, since my best shot at being hurt on the job is to stub a pinky on the paragraph key, right?)

The Steelers' positives have been the plainest to see, primarily because they're 7-5 after starting 0-3, then 1-4. Everyone suddenly loves them as the cuddly underdog each Sunday, no matter how dramatic the role reversal, since the circumstances have been not only accepted but also embraced. It's felt like "playing with house money," as David DeCastro told me after beating the Browns.

There's more, though, and I'll start with this: If Sean Davis doesn't get hurt, the Minkah Fitzpatrick trade never gets made.

Uh-huh. Got your attention now?

It's true, and it's confirmed right from Mike Tomlin that Davis going onto IR was the main motive for Kevin Colbert to send his 2020 first-round draft pick to Miami for the top secondary talent seen in these parts since Troy Polamalu's prime.

And what's the fair value in finding out, through Roethlisberger's absence, about the short-term and long-term implications of his departure, whenever that might occur? Is Mason Rudolph the guy? We might not know for sure, but we know way more than we did. Same goes for finding out what's really there at several other offensive spots, not least of which is that JuJu Smith-Schuster might not be a true No. 1 wide receiver, that James Conner might not even get a contract next year, that the offensive line is in need of young blood sooner than we'd thought, and much more.

If Ben stays healthy, there'd never be the capability to expose all of that to this level. So, regardless of how 2019 winds up, the bank of knowledge toward 2020 and beyond is that much greater.

Oh, and this, too, as worded magnificently by Jeff Capel, Pitt's basketball coach, just yesterday regarding Mike Tomlin:

I'll underscore that finish: "Year in and year out, he's been one of the best coaches in the NFL. And it's unfortunate that they had to lose everyone for people to maybe appreciate that. Sometimes you can take really good things for granted."

Yeah, that, too. Talk about a valuable lesson that otherwise couldn't have been learned by far too many.

The Penguins are either approaching the Steelers' level of injury damage or have surpassed it, though I'd lean toward the former since I don't see a position in professional sports more singularly pivotal than an NFL quarterback. Either way, it's been so bad on the ice that nary a day passes without another skater being branded with upper-body this, lower-body that. This past weekend alone, Bryan Rust and Patric Hornqvist were both lost in bleeping practices.

Mike Sullivan told our Dave Molinari the other night in St. Louis he's never experienced anything like it in a lifetime of hockey.

But positives can be rattled off here, as well, chief among them that Evgeni Malkin looks reborn. I'd written that nothing mattered more to the franchise this winter than his immediate future, and he's obliterating all doubts. No one can know if that occurs in Crosby's shadow, given how each always raises his game in the absence of the other. This was the time for Malkin to find himself anew.

There's a bunch more: Rust had been seen by some as trade bait this past summer, but he's dazzled in first-line duty that might not have been available. Newcomers Alex Galchenyuk and Dominik Kahun couldn't be assessed without significant time in the top six, as well, and Kahun, at least, is making the most of it. If Galchenyuk doesn't, it at least makes the call to cast him off into free agency next summer an easy one. John Marino merits inclusion here, too, since he's gone top-four on the blue line without blinking when Kris Letang and Justin Schultz went down. And if that holds -- I'd be stunned if it doesn't -- that could put Schultz in the same circumstance as Galchenyuk. If both go, that's a huge chunk of cap space for 2020-21.

I'll throw this in: Sullivan, like Tomlin, has already acknowledged -- to me up in Winnipeg a few weeks back -- that it's easier to get players to buy in to a system in times of trouble. That's become evident. The outcomes haven't always been there, but we've seen some of the smoother systematic showings in years.

Good, because the Pirates' positives for losing Taillon, most of their starting rotation and a slew of others ... um, that came with one blessing above all: Everyone was fired.

There's no question in my mind the injuries set the stage for the post-All-Star collapse. Just as there's no question in my mind that, without the post-All-Star collapse and all the corresponding public pressure that followed the season, Bob Nutting wouldn't have taken action on any one of Frank Coonelly, Neal Huntington, Kyle Stark or Clint Hurdle, never mind sweeping out all of them.

Front offices can get healthier, too.

Hang in there. It'll all get better. Law of averages 'n' at.