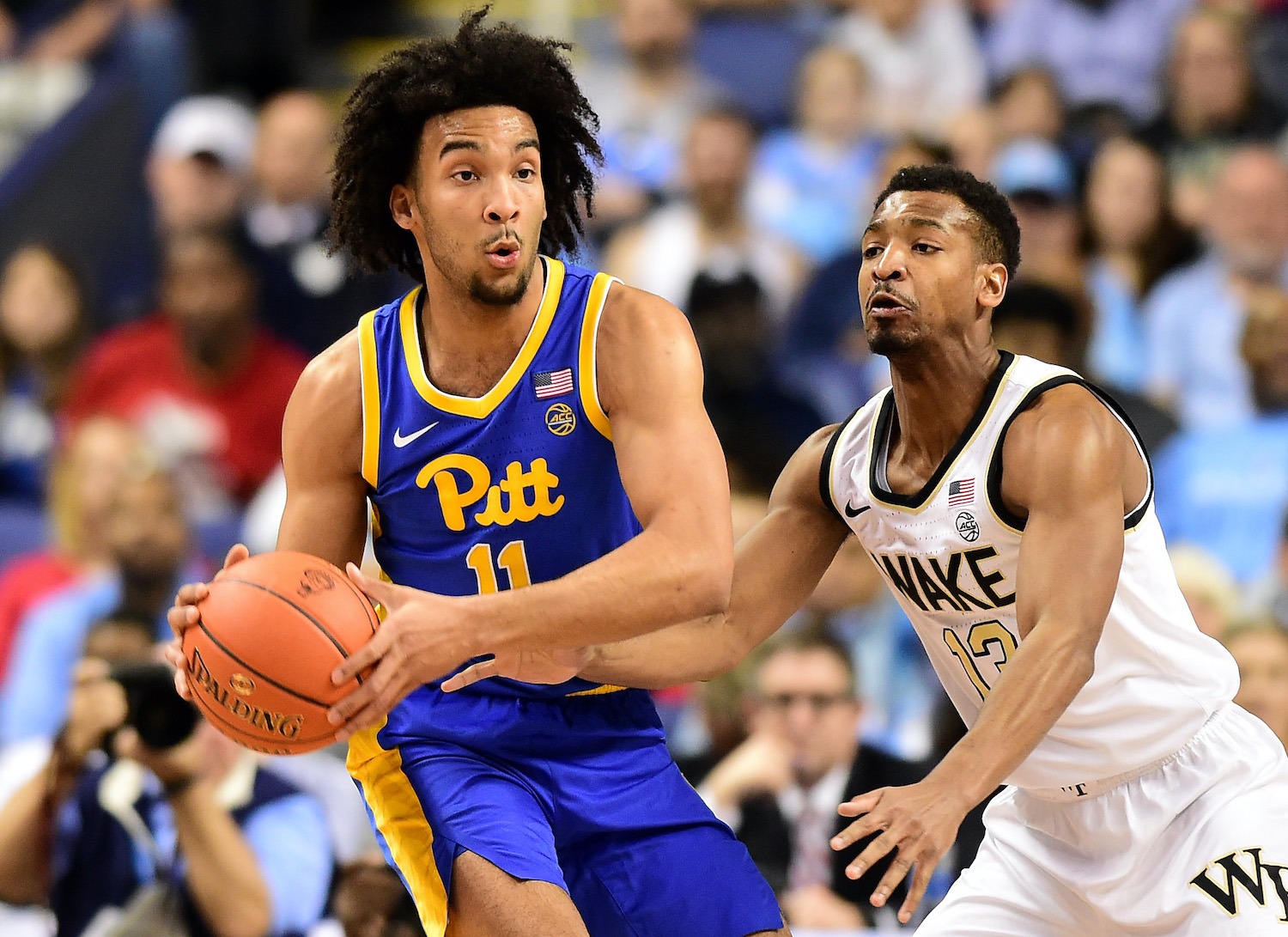 GREENSBORO, N.C. -- For Justin Champagnie, this one was personal.

"I just came out here to do this because I felt disrespected about not making the ACC Freshman team," Champagnie was telling me after this game, an 81-72 Pitt victory over Wake Forest to propel the Panthers into the second round of the ACC Tournament here at Greensboro Coliseum. "I just came out here to show people that I deserved to be on that team.

"About it" for Champagnie included the following:

It's not like it came out of nowhere, either. Champagnie hit 30 in Pitt's most recent win before this one, way back in early February over Georgia Tech at the Pete. He also led Pitt in scoring (12.2 points per game) and rebounds (7.2 per game) through the regular season and was thrice named the ACC Freshman of the Week. If that's not enough, add in a National Freshman of the Week distinction to paint the full picture of Champagnie's standout freshman campaign.

“That [Champagnie didn't make the ACC All-Freshman team] hurt me, to be honest," Xavier Johnson, who had 10 points on 50 percent shooting, five rebounds, eight assists and three turnovers in this one, was saying of his teammate after the game. "I think he earned it. He’s been killing teams for the last couple games. I think he averaged the most points on our team. He proved it tonight that he should’ve been on it.”

The dude can play — and this might just be the beginning.

“He’s pretty under-appreciated but not down about [not being named to the ACC All-Freshman team] because he’s just going to go out there next year and just compete for more," Johnson continued. "I’m pretty sure he wants more than All-ACC Freshman.”

In Champagnie's case, it's not just the total points, either. It's how he's getting it done. There's a polish and refinement to his game not often seen from an 18-year-old player in the ACC or elsewhere. The nine points from long range boost his output significantly, but Champagnie's game is unique, built around finding open spaces and filling them. He'll work along the short corner, analyze a defense, pick his spots, take the pass, then make a play.

Tonight, that play looked like this: Baseline cut, receive the feed from Johnson or McGowens, reverse layup.

That last part — the reverse layup — intrigued me. It's a smart play along the baseline if you can finish it because it's nearly impossible to block.  With the 7-foot Olivier Sarr looming in the back of Wake Forest's zone, it was an intelligent read from Champagnie to help negate his opponent's shot-blocking abilities. If Sarr cheated and played the reverse, it's an easy baseline dunk on the near-side. If he played the sequence straight-up, however, Champagnie could go to the reverse and finish.

Champagnie, playing beyond his years, recognized all that and explained when I asked him about it.

"Sarr is very, like, athletic and long," Champagnie was saying. "I just felt like if I go for a reverse layup, nobody's going to really get it. I can go high off off the glass, just put it right in the basket, so I feel like that was a go-to move for me tonight."

That's a basketball player, ladies and gentlemen — an All-ACC Freshman, even if the votes don't show it. And that point isn't lost on Johnson, who realizes exactly what Champagnie brings each and every night he takes the floor for this Pitt program. To be clear here: With Champagnie, it's not just about this year, however much longer it lasts. It's about the future, that sense of building and growing Jeff Capel always mentions. Champagnie figures to play a huge part in that, and Johnson couldn't be happier about it.

"It’s good seeing him grow," Johnson said when I asked him about playing alongside a budding freshman like Champagnie. "Seeing him do that? That right there, that’s what me and Trey did, and I love it. Love to see it from him. Love it.”

Yeah, but what about the bigger picture here, man? That's not just a teammate now, that's a guy to build around, right?

“It feels great," Johnson said of the future. "It feels great. Even [Karim], ‘rim did a good job today coming off the bench.”

That's Adoul Karim Coulibaly Johnson name-dropped there, and for good reason. The freshman from Mali, West Africa, put up 10 points and seven rebounds in 15 minutes, helping fuel Pitt's run, especially in the second half, when Capel turned to him and Eric Hamilton exclusively, leaving Terrell Brown on the bench.

"Two of our freshmen — Justin, obviously, and Karim — for those guys in this stage, their first game in the ACC Tournament, to come and have the performances that they had is remarkable," Capel was saying after the game. "So I'm proud of them. Proud of all of our guys."

It's the kind of performance from two newcomers that can make a seven-game losing streak feel distant. Next up: Round 2, North Carolina State, Wednesday at 2 p.m.